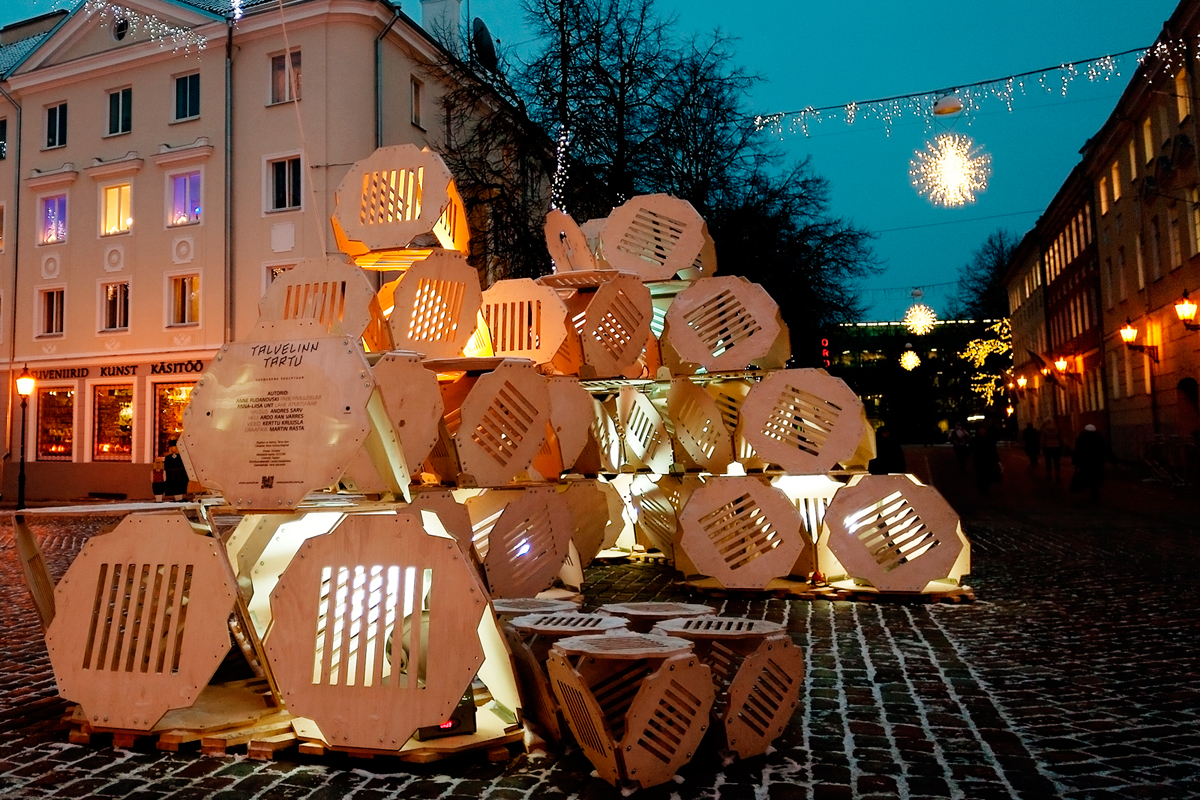 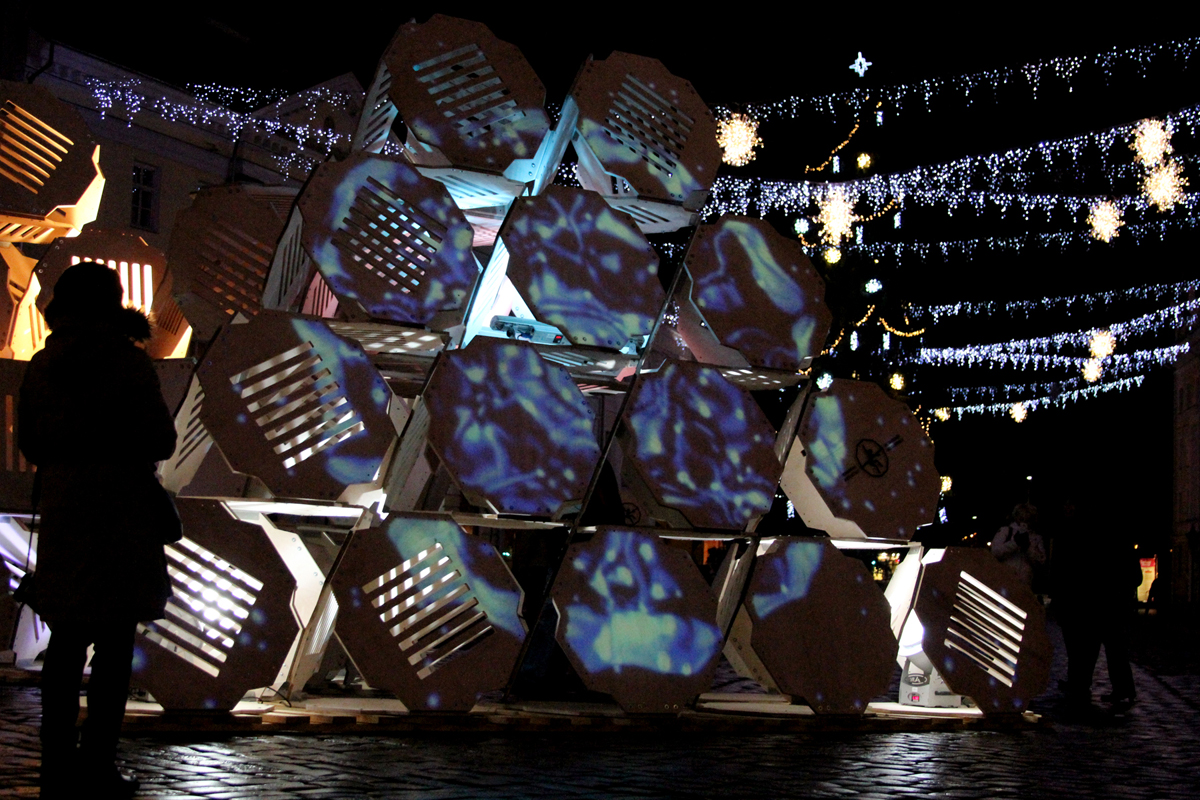 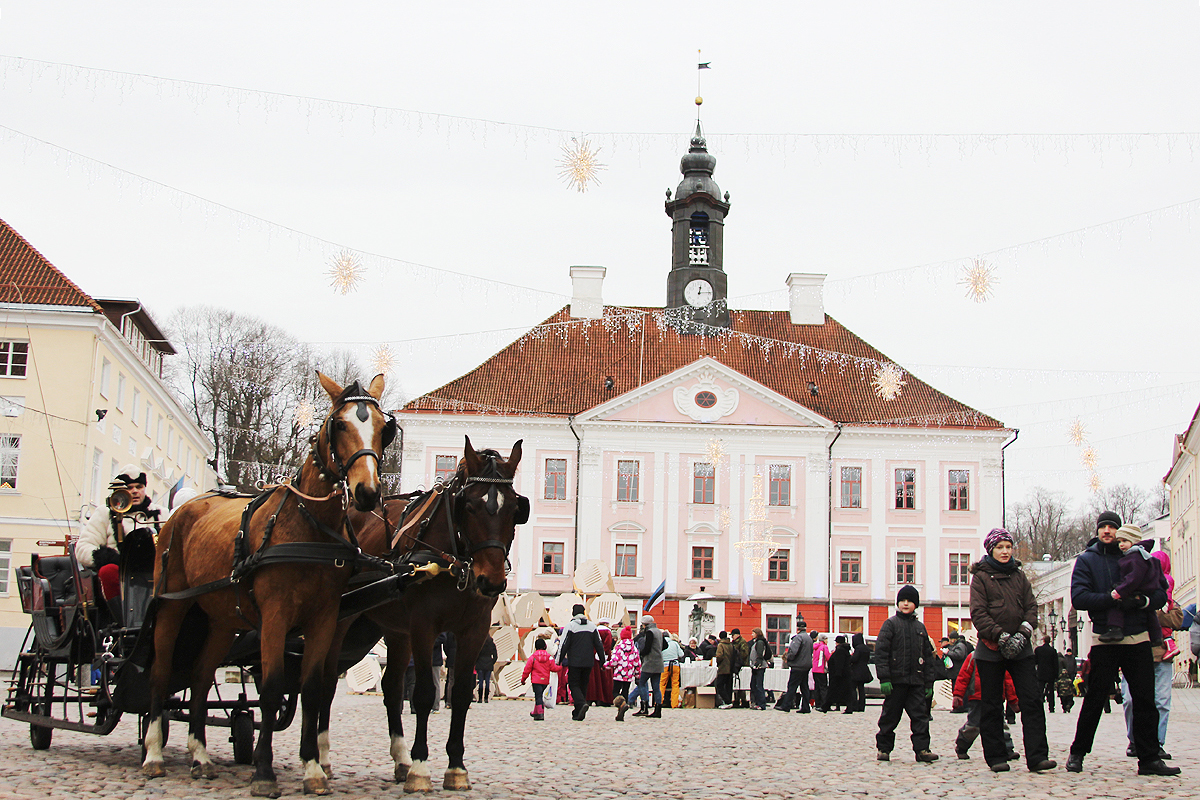 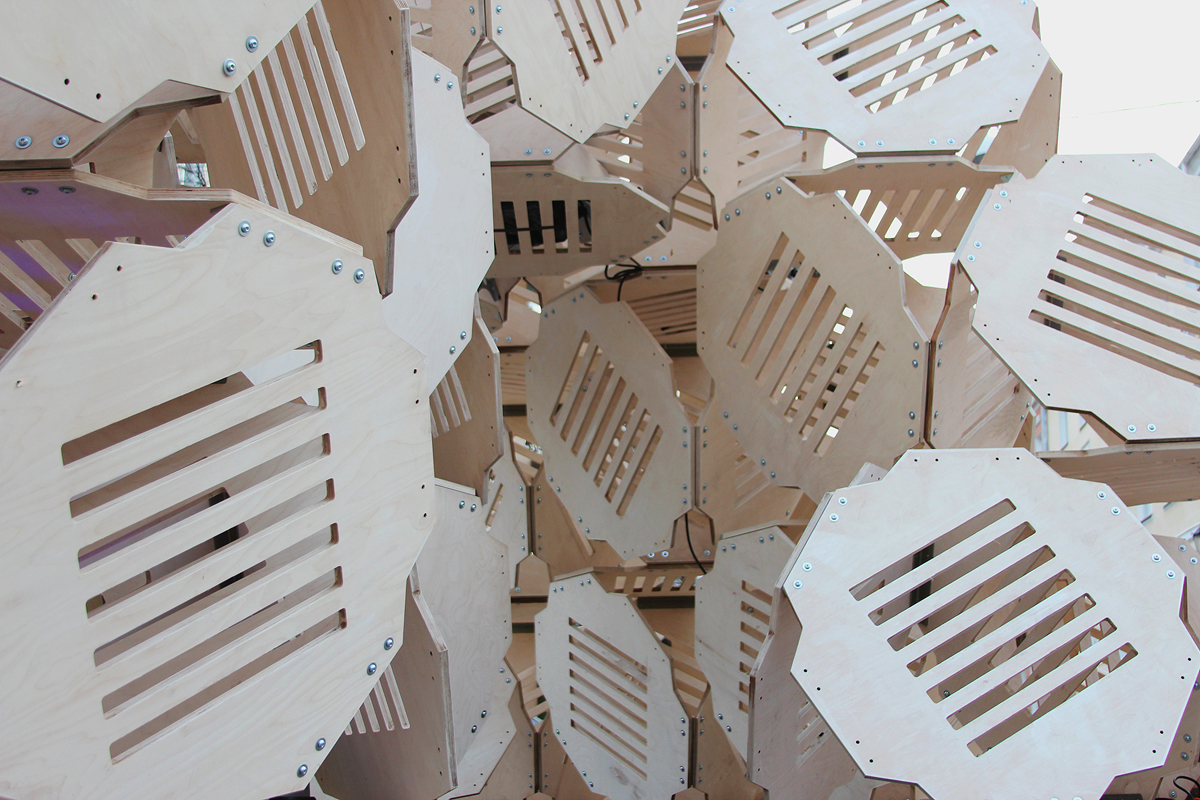 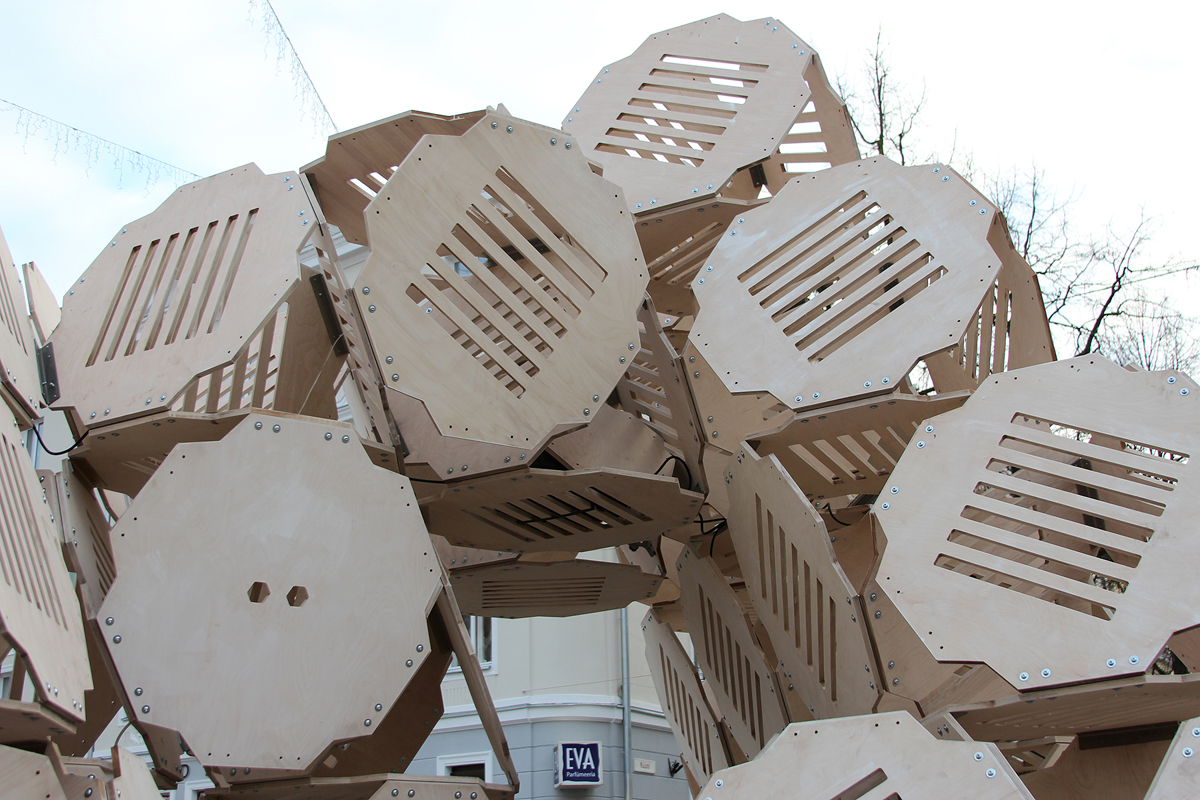 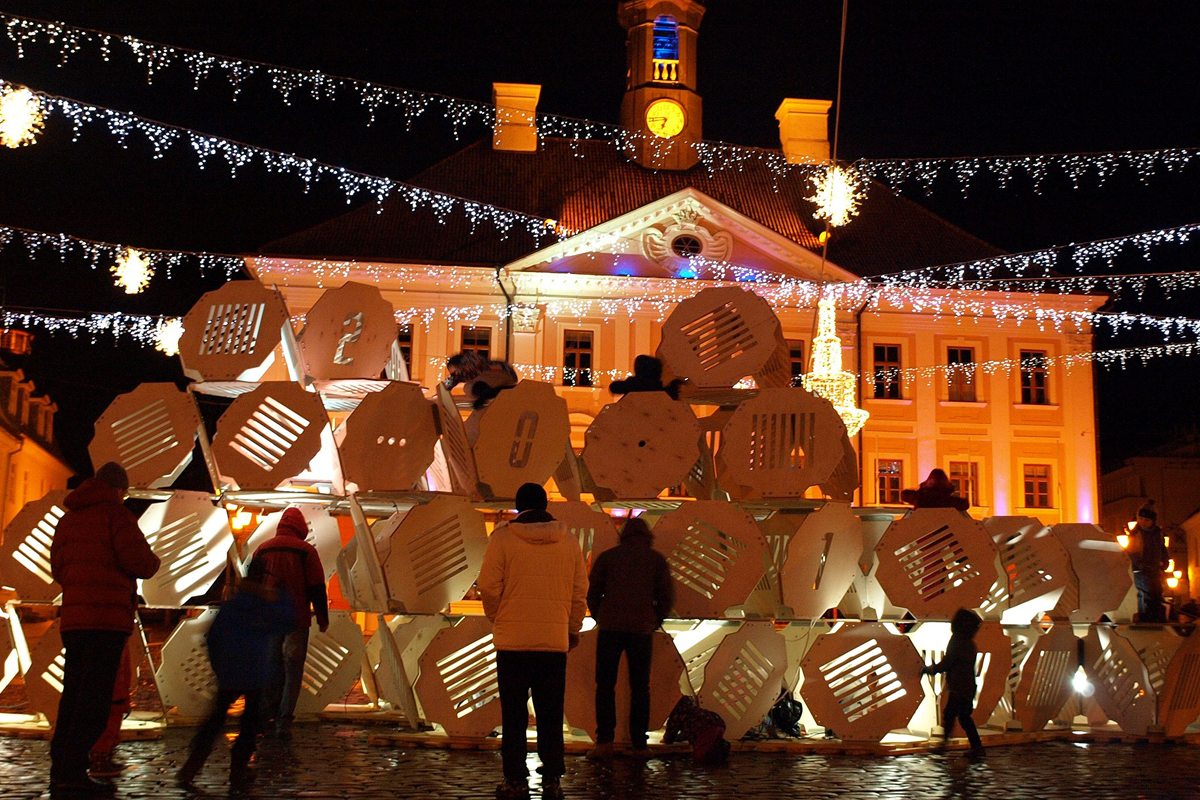 The Town Hall Square of Tartu, Estonia, introduces a wooden architectonic volume that emphasises the Nordic winter image. The modular system of the form is based on geometry as one of the basics of nature. Water freezes into a hexagon, joined hexagons make tetrahedrons with cropped corners. These individual volumes can form an endless spatial network, growing as a carpet of snow or an iceberg.

This particular modular system is also generated on the basis of hexagonal pieces that can be joined into very different combinations. The Town Hall Square features a plywood sculpture, information boards and benches; the same principle can be utilised for crafting a lamp, Christmas decorations or garden furniture, choosing any suitable material from paper to metal.

The modular logic is an open access solution, it is meant for free public use – necessary drawings are available for download and further development.

The project was initiated by the city, searching for a fresh and coordinated winter image as opposed to several singular decoration concepts. An open competition was announced in 2012, the winning entry (2nd prize – no first prize was awarded) proposed a concept combining origami and Nordic representations of winter. As the city felt little current need for the proposed foldable/collapsible iceberg-looking kiosks, it was decided to develop the concept into a series of possible forms and functions carrying the same idea.

The current solution is one among the first steps of a larger program triggered by the winter competition. The city of Tartu is encouraging interdisciplinary cooperation in order to test an even wider range of spatial interventions. The initiative has resulted in a collaboration platform UUSNURK (“The New Angle”) that uses the city as a laboratory in search of new ideas and possibilities for enriching urban space. The platform joins specialists, stakeholders and students of different fields for working out and testing programs, interventions and forms that all carry the same initial idea: to be inspired by natural processes and structures while combining both traditional manual techniques and digital tools.

The presented structure is worked out by sculptor Anne Rudanovski and landscape architect Anna-Liisa Unt in tight collaboration with city representatives and designers from other fields. A custom sound experience is worked out for the sculpture, as well as a lighting concept and video installation. A majority of all public holiday events are connected with the new space, supported by a strong visual concept ranging from information graphics to pattern sheets for DIY models of the same structure.

And last but not least – the Winter City launch event (somewhat unexpectedly) identified the most appreciative user group: children, who instantly recognised the structure as a challenging play environment.